Ambission works to break in from afar 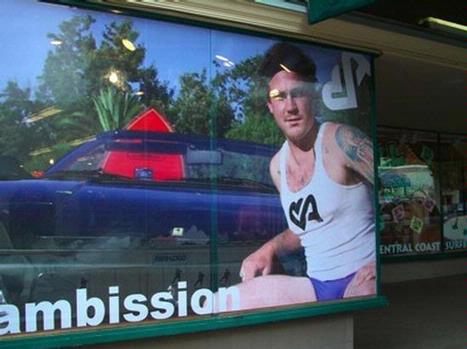 Ambission works to break in from afar

One of the young founders of Ambission based in Arroyo Grande in the Central Coast recently emailed me with the story of his brand. It’s a pretty good story and worth sharing – plus, he has a good sense of humor.

I asked Dustin Odbert some questions about how hard it is break into the industry from outside of Orange County. Dustin and his brother, Dylan, founded the brand two years ago to raise money for a friend who was hit by a train and lost two legs and an arm.

Ambission is carried in 42 stores in California, one in Florida and two in New Jersey. Accounts include Spyder, CCS, Mitch’s, Odysea, Wavelengths, Revolution, Panchos, Villains and Beach House.

Is it hard to make it as a surf brand on the Central Coast?

Yeah, being on the Central Coast does present its challenges. First of all, we

are completely removed from what I have heard reference to as the “Surf Ghetto,” being Newport Beach. I think it would be a little bit easier to create a buzz about AMBISSION if we were in the mix everyday. The saying, “it’s who you know and not what you know,” I have found is completely relevant in this industry. After every season it gets easier and easier, though.

The cool thing about being out of the loop is that our design quality is totally original and we have this sort of following down south that is hungry for what AMBISSION has to offer.

Sourcing is also another challenge around these parts, so I find myself in LA quite a bit dealing with cut-and-sew issues.

What product categories do you have?

In the two years AMBISSION has been around we have limited the offerings to T’s, hoodies, walk shorts and denim. For Spring we added two boardshort styles and a sweet French terry hoodie we like to call Catoflauge because of its all over cat print.

I am very excited to launch our fall ‘08 line, which will include our signature AMBISSION Reversible Denim (patent pending), amongst other fun and creative pieces. I think buyers and customers alike will be very impressed with how far we have come since last fall.

How are you funded? Do you have any investors?

Funding is also another obstacle we had to learn to get around. My brother and I have been funding AMBISSION on our own, with loans from family here and there. It can be frustrating competing with new brands that really come out swinging with huge lines, ad campaigns, and seemingly endless bank accounts. Nevertheless, I think people appreciate that about AMBISSION. We started

this brand the way most shop owners started, a lot of hard work, struggle and perseverance. When I come through the doors of most shops, the owners and kids genuinely want to know how the brand is doing. They know our start up story and they know that we don’t come from big money. In the shops that give us a shot, we are really able to compete with all the other brands.

Can we see your stuff anywhere in Orange County?

AMBISSION has begun making a steady push down south with the addition of Spyder, Mitch’s, and AntiApparel.com. We have also been talking with the good ol’ boys over at SurfSide and hope to be working with them real soon! There is no finish line so we only hope for steady continuous growth. I would hate for us to open every account in California and flub it. Just because you are in every door doesn’t mean you’re selling through for them. I want the retailers and consumers to be stoked on AMBISSION, and grow it to become essential for the success of their retail business.

How would you describe the brand?

I would describe AMBISSION as the new youth against establishment. … Just kidding, but seriously we are just a light hearted company out to do something completely unique to the surf, skate, snow industry. We started out as a fundraiser for a friend in need and we will continue to keep those same values that we started with from day one.