Surfing as art: A talk with Michael Gallagher 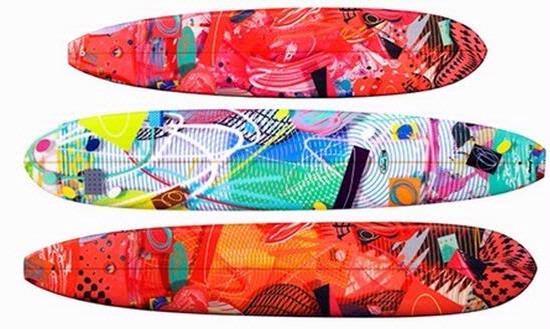 Surfing as art: A talk with Michael Gallagher

Surfside Sports recently took delivery of a long board painted by Michael Gallagher. I happened to be at Surfside just after it arrived, and co-owner Paul Burnett told me the boards may turn into collectors pieces. I even witnessed co-owner Duke Edukas suggesting to Volcom Vice President of Sales Tom Ruiz that he check out the board.

Michael is a serious artist – MFA from Yale University, paintings in the Guggenheim Museum and Smithsonian. I know others are painting boards as well, but Michael’s background impressed me.

I sent Michael some questions about the boards and his art, and wow, he gave me some really interesting answers, complete with photos to illustrate his points.

Why did you begin painting surfboards?

You could say it started in the late fifties when my father brought home a well used and discolored Ole surfboard that I decided to refinish with some new graphics. After taking the board up to my room, sanding and taping it off, I mixed up a batch of various pigmented resins and set to work. Filling the house with resin fumes that lasted for days got me in a fair amount of trouble with my folks.

Here’s a photo of that board with my mother’s ’56 Chevy Nomad station wagon. It was taken in Los Angeles in 1958.

But the truth of the matter is the idea for getting involved with art and surfboards came more recently from my son, Brian.

A little over a year ago, after returning from a six-month surf safari in New Zealand, Australia and Fiji, he said,

“Dad, you should put your art on surfboards! I’ve seen a few really nice art boards. Your art would look great on a board. Would you do one for me?”

What is the business arrangement?

The work is distributed through McKibben Studios in Corona Del Mar.

What is the inspiration for your art?

Creativity takes courage. I am fascinated with what’s difficult, trying to do what I can’t do. I am not an adventurer by choice but by fate. Through color, light, composition and line I have found a way to express that which I could not in words – paint and canvas are the basic grammar of my language.

My work is an attempt to get at the mystic of the creative. For me art is a search for truth, not just an illustration of the facts. My work has always had at its core an expression of dichotomies – order vs chaos, rational vs irrational, real vs illusion, negative vs positive. The process itself is one of creation and destruction until the painting has a life of its own.

My work has at its roots the work of the New York school and the abstract expressionists, such as de Kooning, Arshille Gorky and Jackson Pollock. Like surfing, expressionist painting is a very physical process. Jackson Pollack’s work is often described as a graphic representation of his dance over the canvas on the floor.

The art of surfing is similar. The trail carved by the board through the water, the surface scenery between sea and sky, the submerged terrain over which the board glides result in a dynamic artistic collage. So I see the two as closely related.

Here are a couple of artist’s quotes that resonate with my work and me:

“I don’t like to say I have given my life to art. I prefer to say art has given me my life.” – Frank Stella

“All children are artists. The problem is how to remain an artist once he grows up.” – Pablo Picasso

Where do you live?

What are the price points for the boards?

Which of your pieces are in the Smithsonian and Guggenheim?

Is surfboard art a side project for you or a main focus now?

I don’t differentiate between art on canvas, art on surfboards or art on anything for that matter. The surfboard is just another surface to work on with some unique parameters. Today the line between art and commerce has become blurred, if not eliminated all together. From the earliest forms of recorded history there are examples of our species putting art on just about anything and everything you can imagine.

Do you have any other involvement in the surf industry?

I’ve been approached to license my work for other collaborative projects with surf and skate industries.