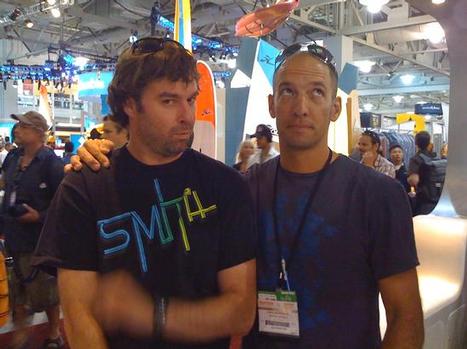 I’m reporting from the Outdoor Retailer Summer Market in Salt Lake City, where on Wednesday, day two of the show, traffic definitely picked up from Tuesday’s fairly slow day. Depending on who you talk to, the show has been hit or miss.

The public relations staff at the OR show said attendance was on par with last year. The economy was still a huge topic of conversation, but Dan Templin, CFO of the VF Outdoor Coalition and the new Chairman of the Outdoor Industry Association, said, “People are a lot more upbeat than the last show.

“There’s definitely a feeling of potential that the economy is really coming back in our section.”

Walking the show, the booths that stood out of the crowd — and the busiest — were brands which also cross over into action sports. The Sanuk, Olukai, Go Pro, and Smith Optics booths all seemed to be filled with customers the entire day.

“This show has been amazing for us because Sanuk is very embedded in the outdoor industry,” said Sanuk founder Jeff Kelley, who gave his first pair of Sidewalk Surfers to a rockclimber and watched the brand explode within the outdoor market only three years ago.

When asked about the success of Sanuk compared to many other outdoor brands, Kelley noted innovative product and word of mouth marketing.

In contrast to many of the surrounding outdoor brand lines targeting an older consumer, the product inside Sanuk’s booth (including its new tube sock sandal for girls) seemed brighter, more innovative, and complimented with more irreverent marketing.

At Smith Optics, the booth also seemed to have a steady crowd. The new products appeared much more out-of-the-box than other outdoor eyewear companies. Public Relations Director Greg Randolph said even though the show seemed slower than other years, he said OR is important for the brand.

“OR has been a legitimate show for us because people are here to do real business and there’s not as much marketing here as other trade shows,” he said.

Despite being tucked away at the back of the show, the Olukai booth also stood out from the crowd.

The booth is themed as a Hawaiian house — with fresh cut pineapple flown in from Maui to greet guests. Marketing Director Kerry Konrady said he hadn’t been able to leave all day because the booth was so busy.

When asked how the surf oriented sandal brand could seamlessly cross over into the outdoor market, he said, “This group (outdoor market) really understands being an authentic brand and that’s really similar to the surf industry.”

Outside of the action sports brands, there was also a lot of buzz inside the paddle sport branded booths — mostly because of the chatter about a potential new trade show announced by Canoe & Kayak Magazine. The show will be focused specifically for paddle sports and is scheduled to take place September in Minnesota.

Another show means more out of pocket costs for brands that will either have to shell out for another booth or will have to choose between two shows and might miss potential buyers.

At the close of business Tuesday, Outdoor Retailer and the Outdoor Industry Association issued a joint press release discussing their concern. “Both Outdoor Industry Association and Outdoor Retailer feel that a separate trade show at this time will split the industry when together we should concentrate more on growing the market,” said Frank Hugelmeyer, president and CEO of OIA.

Talks will continue at a meeting September 29 to October 1 in San Diego.

Another topic of conversation at the show was the troubles of CIT, the largest factoring company in the U.S. CIT services small to mid-sized business, including many in the outdoor retail market. CIT was on the brink of filing for bankruptcy this week until its bondholders arranged an emergency $3 billion loan, and its financial health remains precarious, according to reports in the New York Times and Wall Street Journal.

Olin Hyde, CEO of American Bankcard Capital, which provides financing for small to medium sized companies, talked to more than 40 brands at the show, many of whom are struggling financially.

“From a factoring perspective, there are a few brands that are credit worthy,” he said.

Hyde was also disappointed to see so few orders being written.

“The only excitement at some of the booths revolved around free beer,” Hyde said.

On the bright side, Hyde noted that the companies targeting millennials, those with genuine green messages, and those who have found ways to capitalize on stay-cation and thrift were the busiest.

“I’m excited that the more authentically green companies and those that are providing the biggest value to the customers are also the ones that seem to be doing the best,” he added.