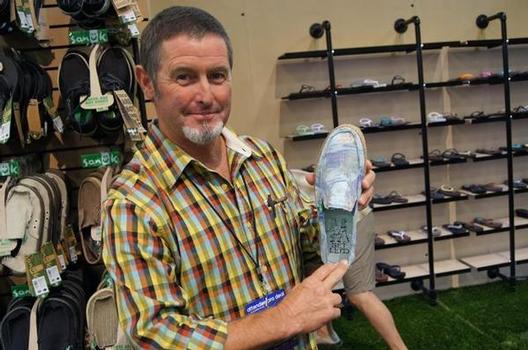 Before the show, I was in the Cardiff Town Shopping center in Cardiff-by-the Sea, and saw a Sanuk-branded popup shop next to Seaside Market.

The store was fairly small — about 12 x 30 feet — and I thought it might be a permanent showroom since Jeff Kelley lives in the area. Inside, the girl working said the store was actually a partnership with Hansen’s Surf Shop in Encinitas.

Jeff said the owner of the town shopping center came up with the idea first, and then Jeff approached Josh Hansen who runs Hansen’s.

Hansen’s controls the inventory, manpower and POS system, and Sanuk contributed to the artwork, look and feel of the store.

Jeff said it’s only a temporary shop that will remain for four months until a Starbuck’s takes over the lease, but that it’s been successful so far.

While that particular shop will come down in a few months, Jeff said if the right opportunity presents itself, he would be open to launching more partner popup stores with other retailers in the future.

Since Deckers acquired the brand, I asked Jeff if retail is going to be a big push for the brand.

He said there are definitely plans to roll out more Sanuk stores soon, both domestically and internationally, though growth will be organic.

Besides more stores, I wanted to know if they were going to add apparel or any line extensions any time soon. They said the brand will continue to focus on footwear for now, and that Sanuk does not like the idea of brand extensions.

One of the biggest reasons Sanuk choose Deckers as its buyer is that the company is focused on footwear, and is not an apparel company, Jeff and John said.

Deckers COO Zohar Ziv and Jeff Kelley at OR

I also asked Jeff and John what Deckers has brought to the table so far. I especially wanted to know if Sanuk was now helping Deckers-owned brands like Teva get proper introductions to the action sports world, and if Teva was helping them gain more accounts in outdoor.

Deckers has definitely provided account lists and reports that show what products sell where, broken up into dollars, geography, etc.

“We merged that info with our own lists to see what we are missing and in some cases where maybe we are only doing a fraction of what Teva is doing in an existing account, it’s been an eye opener for us,” John said.

As for Teva, Jeff added that the two brands have had an open dialogue with each other.

“Like with any family, we are going to share resources and ideas,” Jeff said. “They are really different brands, but if they can help us get accounts and we can help them, great.”

He also noted that in terms of marketing, design and other front-end matters, there’s no cross over between brands, and that Deckers has a great resource of eco-friendly suppliers and materials that Sanuk will be able to utilize going forward.

Lastly, in perusing the line, I noticed a few catchy graphics on the Sidewalk series like the new Spam graphics, the Don Bro (mocking Don Ho) and a “Get Lei’d,” print.

I am pretty sure they will invoke at least a smile or two on store floors.