Reef just made some big changes to its sales department under President Mike Jensen.

VP of Marketing Mike Matey is the new VP of Sales and Direct to Consumer. He will lead sales of the wholesale, Reef e-commerce, and third-party e-commerce retail channels. He replaces former SVP of Sales David Schultz, who left the company in 2019.

Mike Jensen said he was interested in putting all of the channels under one umbrella while at the same time finding a way for sales and marketing to work more closely together.

“Matey is really a strategic thinker and he’s a natural with the retail community,” Mike Jensen said. “There are not many people in our building who are better with retailers than him. Plus, he’s run the e-commerce business for years, and we like the idea of building a bridge from the performance marketing team to the sales team. We thought there was a cool harmonization to be done there.”

Gaining experience in sales is also a good step in his career progression for the future.

I asked Matey if he has ever worked in sales before. 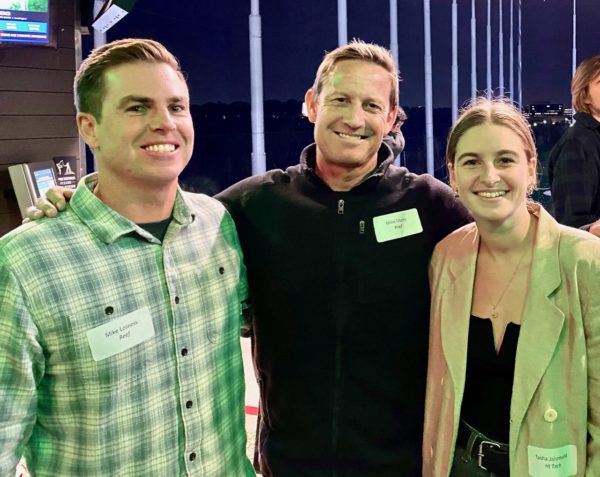 Mike Losness and Mike Matey of Reef with Tasha Jahrmarkt of Hi-Tech at the VIP Retailer dinner at Surf Expo. Mike Losness was also recently promoted.

“That’s what is fun about this,” he said, laughing. “When Mike (Jensen) said we were going to do things differently, he wasn’t joking. But seriously, I’m super excited to stretch myself in a big way.”

The four-person e-commerce team, led by Scott Reynolds, is moving over to the sales team as well.

Other promotions in the sales department include Mike Losness, who takes on the title of Senior Director of Sales and will add  “e-tail” retailers such as Zappos to his existing portfolio of independent accounts.

Kimberly Bayle was also elevated to Director of Sales for Key Accounts.

Reef is on the hunt for a new VP of Marketing to replace Matey.

Reef is now owned by The Rockport Group, which acquired the brand in late 2018 from VF Corp. How Amer Sports is Approaching the Coming Snow Season