Surfrider to Meet with U.S. Officials to Demand Action on the Climate Crisis 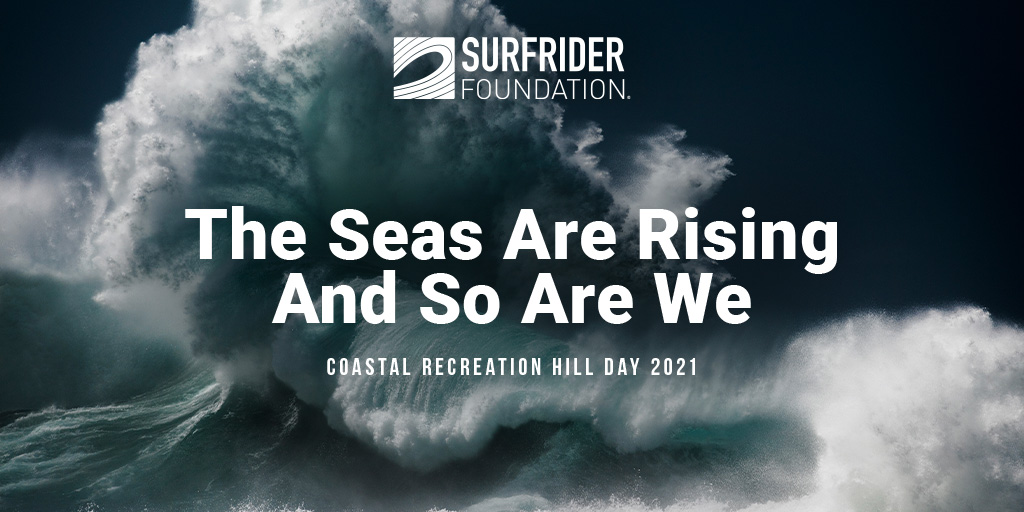 Surfrider to Meet with U.S. Officials to Demand Action on the Climate Crisis

On March 10, the Surfrider Foundation and leaders of the coastal recreation and tourism industry will virtually meet with congressional leaders and White House officials to demand immediate federal action to address climate change. Representing coastal communities across the nation, attendees will meet with more than 150 congressional officials during Coastal Recreation Hill Day to urge comprehensive climate change policies that protect the ocean and coastlines for the future.

“With nearly 40% of Americans living within the coastal zone, this administration and Congress must drastically increase efforts to protect our coastlines from climate change,” said Dr. Chad Nelsen, CEO of the Surfrider Foundation. “Many communities are already experiencing climate change impacts, including extreme weather events, sea level rise, coastal erosion and ocean acidification. Based on current science, those impacts will only continue to grow, costing Americans billions of dollars and harming our coastal economy.”

Clean water and healthy beaches are critical to the nation’s coastal economies, communities, and recreation industries. In fact, coastal recreation and tourism constitute about 2.4 million jobs and contribute more than $129 billion to the U.S. economy every year. Coastlines also play an essential role in protecting communities from extreme weather events and sea level rise resulting from climate change. In addition, natural marine and coastal environments are some of the most effective carbon sinks on the planet, pulling excess carbon out of the atmosphere.

However, the ocean and coasts are increasingly at risk. Warming water and melting glaciers are causing sea levels to rise at an accelerated rate, altering ocean circulation, starving the nation’s waterways of oxygen and changing the ocean’s chemistry. The ocean has already absorbed over 90% of the heat trapped in our atmosphere and nearly 30% of the excess carbon dioxide previously emitted. Scientists estimate that by 2050, 90% of coral reefs will die off from ocean warming and acidification due to climate change. Increased water temperatures are expected to produce more harmful algae blooms, resulting in closed beaches, impacts to marine life, and severe illnesses to surfers and swimmers.

“Climate change represents perhaps the greatest single threat to the survival of our industry and a way of life enjoyed by millions of people,” said Sean Smith, executive director of the Surf Industry Manufacturers Association (SIMA). “SIMA and the surf industry join the Surfrider Foundation in demanding that federal leaders take action on the climate crisis.”

In addition to climate change, the Surfrider Foundation will elevate the voices of the coastal recreation community to demand action on clean water, public health and plastic pollution reduction in 2021 and beyond.

For more information or to get involved, visit Surfrider.org.

The Surfrider Foundation is a nonprofit grassroots organization dedicated to the protection and enjoyment of our world’s ocean, waves and beaches, for all people, through a powerful activist network. Founded in 1984 by a handful of visionary surfers in Malibu, California, the Surfrider Foundation now maintains over one million supporters, activists and members, with more than 170 volunteer-led chapters and student clubs in the U.S., and more than 700 victories protecting our coasts. Learn more at surfrider.org.