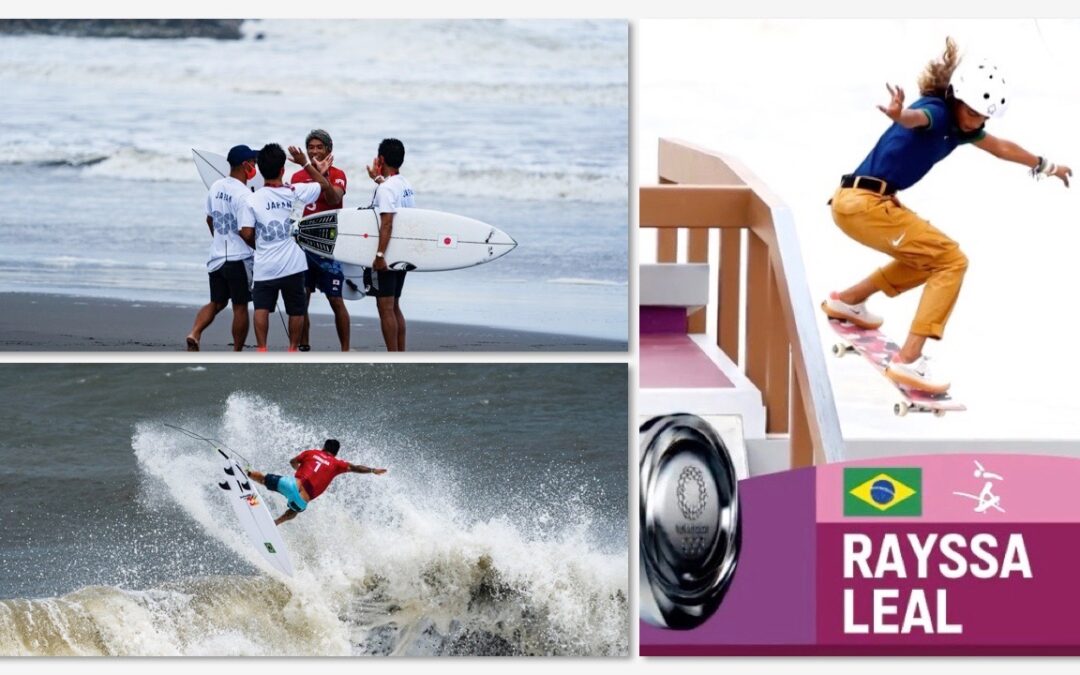 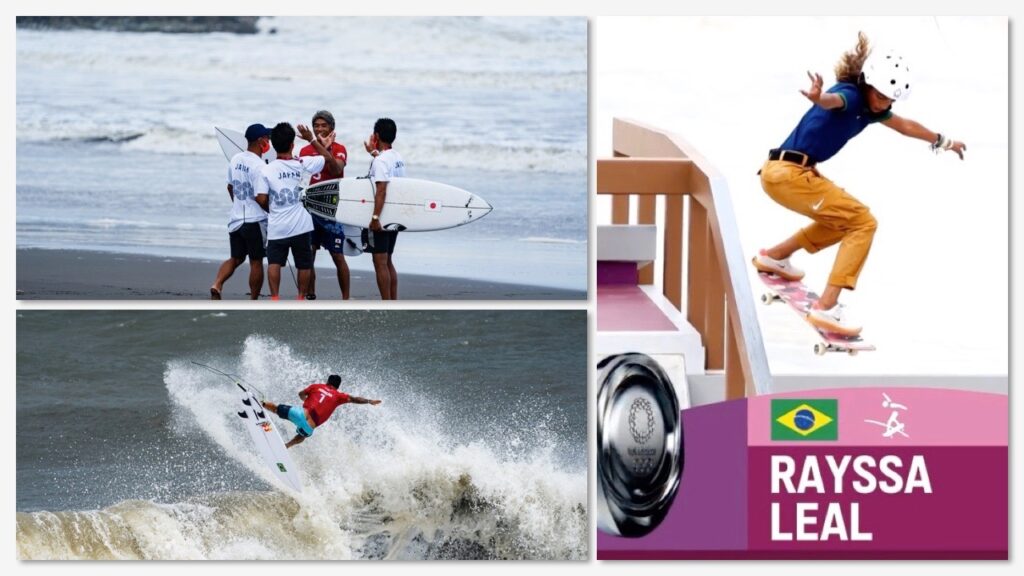 Clockwise from top left: Kanoa Igarashi, who won silver; Rayssa Leal, who won silver in street skateboarding; and Italo Ferreira, who won gold. Photos courtesy of ISA and the Olympics.

We have some fascinating data courtesy of Hookit, the social media analytics and sponsorship valuation company, that shows just how much the Olympics allowed surf and skate athletes – and by extension their brand sponsors – to increase their social media reach during the Games.

Our friends at The Boardr, the skateboarding event company, also shared interesting data with us about the surge in interest in female skateboarders during the Olympics based on page views of their comprehensive database of global skateboarders.

Surfing silver medalist Kanoa Igarashi saw the highest growth rate in percentage terms in the number of followers among all surfers during the Olympics: 205%.

But in pure number of followers gained, Italo added 1.9 million and Kanoa added 850,000, according to Hookit.

“The Olympics is really just a truly incredible platform to raise the star power of any of the athletes that are participating,” Roger said.

Skate medalists Yuto Horigome of Japan and Kelvin Hoefler of Brazil each saw big growth in fan interactions during the Games, increasing their average interactions per post by 24 times and 20 times, respectively.

Overall, Olympic surfers gained 18 times more followers during the Olympics than they added in the period before the Olympics and Olympic skateboarders added 26 times more.

That’s a bigger jump than some more traditional sports experienced.

For example, athletes in sports such as swimming and diving, gymnastics, and track and field collectively only saw 10 times more followers gained during the Olympics than before, according to Roger.

The calculation includes factors such as brand logos or brand names appearing in photos, how prominent the logos are, if there are a lot of logos in the image competing for attention or a few, if brands are tagged and if they are mentioned in the text of the post as well.

Roger was surprised that even given the strict regulations against promoting brands that are not official Olympic sponsors, Olympic athletes still saw a big increase in the value they generated for their partners during the Games.

According to Hookit, the top brands overall promoted in surfing during the Games included Hurley, Comcast, GoPro, Red Bull and Rip Curl.

Among surf brands specifically, Hurley and Quiksilver each saw the biggest increase in sponsorship value from promotion by athletes.

Birdhouse Skate and Adidas saw the biggest increases in sponsorship value, according to the Hookit calculation.

Our friends at The Boardr shared some interesting data with us as well. They have a comprehensive list of skater profiles and rankings for all professional skateboarders, both male and female.

Rob Meronek, a partner at The Boardr, compared the most viewed skater profiles from the week during the street competition at the Olympics vs. the same week the year before.

Last year, the top 12 most viewed profiles were all guys, with Nyjah Huston, Christian Wilson, and Andy Anderson the top three. The top female skater profile, which came in No. 13, was Lizzie Armanto. In fact, she was the only female in the 25 top-viewed profiles last year.

This year during the street Olympic contest, the top five viewed profiles were all females, with Roos Zwetsloot of the Netherlands garnering the most interest by far. Zwetsloot made the finals of the street competition, coming in fifth place.

Momiji Nishiya of Japan, who won the gold medal in street, had the second most viewed profile, followed by Charlotte Hym of France, Rayssa Leal of Brazil, and Julia Brueckler of Austria. Not one of those skaters were in the top 100 most viewed profiles last year.

There was only one skater – male or female – that was in the top 10 most viewed profiles last year as well as this year during the Olympic street contest time frame.

That was Nyjah Huston, who this year during the street competition time frame came in No. 9 vs. having the No. 1 viewed profile last year at the same time.

Interestingly, the Olympic park competition did not draw nearly the same amount of traffic to The Boardr’s website. One theory Rob has is that the street contest can be a hard watch for people who don’t understand it because there are so many “bails,” or falls. That may have led to fewer people being interested in watching the park contest in the Olympics.

“More people will now skate, more parks will be built, and all that,” he said. “Plus, the underground, outcast crust that all the older skaters like me came from will still exist and thrive. I love all these different worlds in skateboarding. Outcast, independent, f*** you kind of kids still have options to find their people, and full jock kind of kids also have options if all they (or their parents) can think of is gold.” 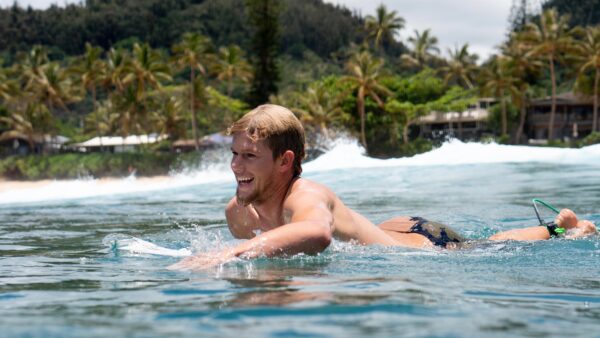