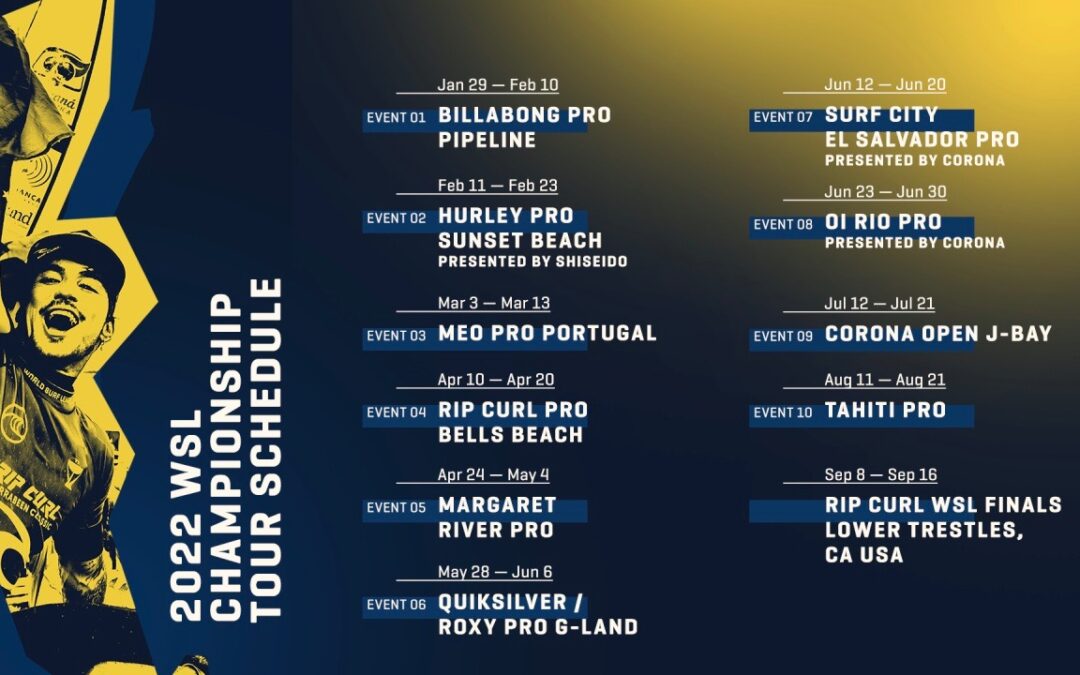 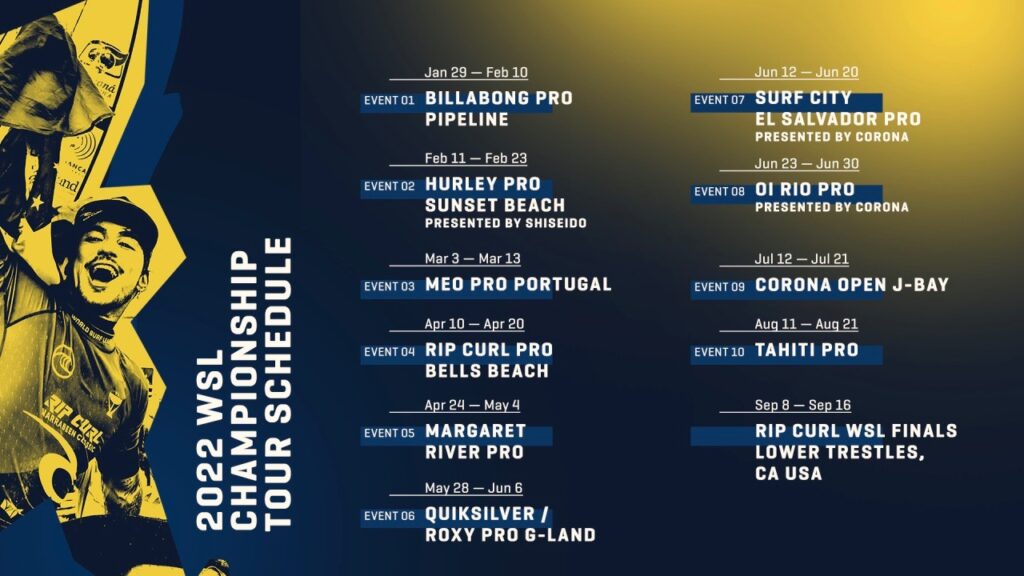 Today, the World Surf League (WSL) announced the location for the 2022 Rip Curl WSL Finals and released the updated 2022 Championship Tour (CT) schedule. As part of Rip Curl’s three-year partnership, the second edition of the one-day, winner-take-all showdown, the Rip Curl WSL Finals, will return to California State Parks, San Onofre State Beach, Lower Trestles. The 2022 Rip Curl WSL Finals waiting period will run from September 8 – 16, an ideal time of year for solid Southern Hemisphere swells to light up the cobblestone point of one of the most high-performance waves in the world.

At the conclusion of the regular 2022 CT season, the top five men and top five women on the CT rankings will head to Lowers in San Clemente where they will battle head-to-head for the World Title.

“The inaugural edition of the Rip Curl WSL Finals was an incredible success,” said Erik Logan, WSL CEO. “To see the WSL Final 5 go head-to-head in amazing waves and to witness the women’s and men’s World Titles be decided on the same day, in the water, for the first time was special. This new format captivated our audience and drove consumption like never before and was the most-watched day of professional surfing with the largest live digital audience in WSL history. We are excited to return to Lowers this season.”

Rip Curl’s commitment and support of professional surfing continues through the three-year partnership of the Rip Curl WSL Finals.

“We’re incredibly supportive of the return to Lower Trestles for the 2022 Rip Curl WSL Finals,” said Brooke Farris, Rip Curl CEO. “As a world-class, high-performance wave, it’s the perfect canvas for the world’s best surfers to push the boundaries of what’s possible in the water. While our brand was born at Bells Beach Australia, Rip Curl has an incredible heritage at Trestles, the surfing heart of California. We’re beyond excited to continue building on our brand’s legacy as we partner with the WSL to crown the undisputed world champions of surfing.”

For the first time, the men’s and women’s CT will be completely combined, with the male and female athletes competing at the same CT venues with an equal number of competitions, and the continuation of equal prize money. The new CT format will also introduce the mid-season cut before concluding at the Rip Curl WSL Finals in Lower Trestles.

The 2022 WSL CT will include 10 regular-season events in seven countries, starting with the Billabong Pro Pipeline in January at the world-famous Banzai Pipeline in Hawaii. This will mark the first-ever men’s and women’s combined event at the legendary break. G-Land in Indonesia returns to the CT schedule for the first time in 24 years for the men, and for the first time ever for the women (Quiksilver / ROXY Pro G-Land). The world’s best surfers will also compete in El Salvador, in the Surf City El Salvador Pro, for the first time on the CT. The regular season will conclude in August, at Teahupo’o in Tahiti, and provides one last opportunity for surfers to make the WSL Final 5 before the second-annual Rip Curl WSL Finals in September.

WSL Final 5 determined to battle for the undisputed men’s and women’s World Titles.

With new venues and a revamped Tour structure, the 2022 CT season will start with 36 men and 18 women. Halfway through the season, the field will be reduced to 24 men and 12 women. The top-ranked surfers will automatically requalify for the 2023 CT as well as continue on to the second half of the tour, where they will be joined by two men’s wildcards and two women’s wildcards (one season wildcard and one event wildcard).

The health and safety of our athletes, staff, and the local communities we visit are of the utmost importance, and we have a robust set of procedures in place at every event to keep everyone safe. The WSL continues to monitor the COVID-19 pandemic and work closely with government partners and local health authorities to make the best decisions for our athletes and the sport.

Given the complexities of global travel during this pandemic and the fluid nature of the situation, we will maintain the flexibility to adjust and react accordingly, and there could be potential adjustments to the schedule. All tour stops and dates are subject to change due to applicable COVID-19 related restrictions, and the WSL continues to work hard on behalf of our athletes so they can safely travel as we move into the 2022 season.

The Billabong Pipe Pro will kick off the new season starting on Saturday, January 29, 2022. The competition will be broadcast LIVE on WorldSurfLeague.com, the free WSL app, and the WSL’s YouTube channel. Also, check local listings for coverage from the WSL’s broadcast partners.

Established in 1976, the World Surf League (WSL) is the home of the world’s best surfing. A global sports, media and entertainment company, the WSL oversees international tours and competitions, a studios division creating over 500+ hours of live and on-demand content, and via affiliate WaveCo, the home of the world’s largest high performance, human-made wave. Headquartered in Santa Monica, California, the WSL has regional offices in North America, Latin America, Asia Pacific, and EMEA.