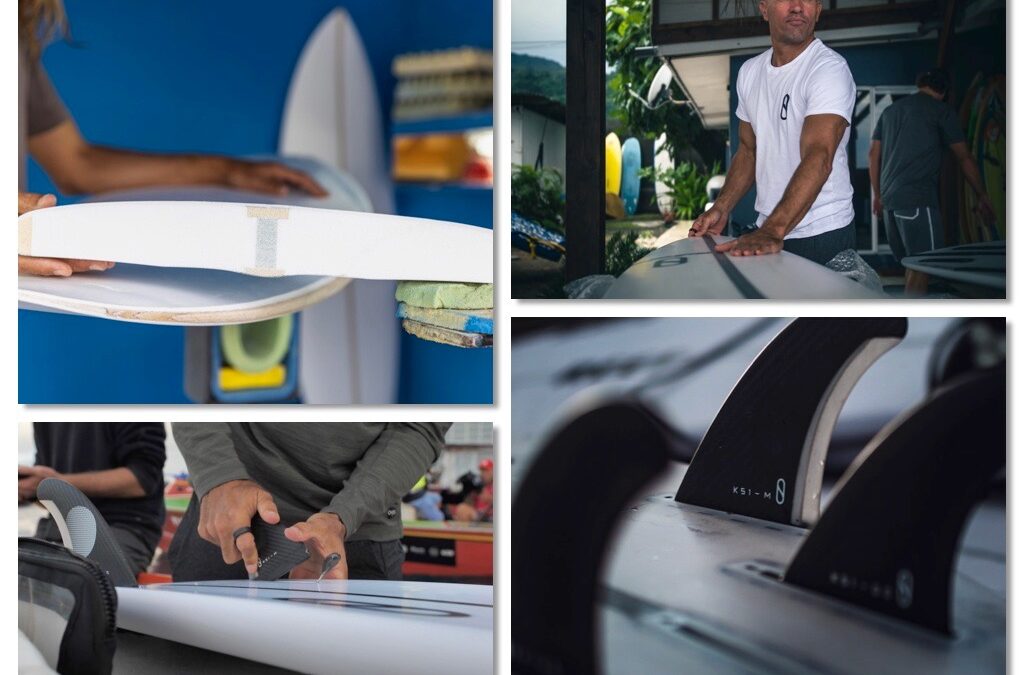 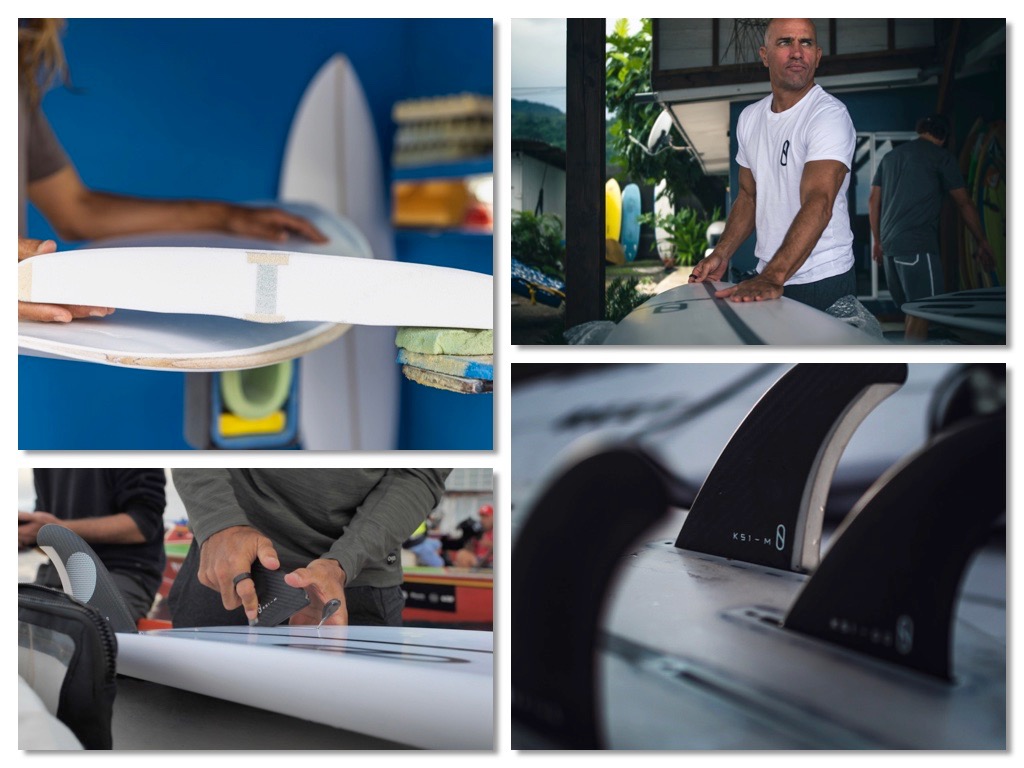 Firewire Surfboards, one of the largest premium surfboard manufacturers in the world, has decided to produce all its boards with Futures Fins boxes and phase out construction of boards with FCS boxes over the next several months.

The company made the tough business decision recently, according to Firewire CEO Mark Price, essentially shifting its extensive surfboard product line including brands such as Slater Designs, Firewire, and Tomo from 50 percent of each to 100 percent Futures.

SES spoke with Mark to discuss the reasons for the shift to Futures. He also spoke about how hard it was to make the decision and break the news to FCS.

“It’s one of the most difficult conversations I’ve had in my life because we have had a 20-year relationship,” Mark said.

“It is disappointing that Firewire has chosen to remove ‘choice’ for their customers,” said Garth Grundy, the CEO of Surf Hardware International, the parent company of FCS. “This commercial decision will result in denying Firewire’s customers access to the FCSII system along with our exclusive range of high performance fins from world champion athletes to the best shapers globally, and revolutionary Swiss engineered H4 fins which we believe are the best fins in the world.”

(See a complete statement from FCS below.)

Currently in the surf industry, FCS and Futures are the two dominant fin systems used by most major manufacturers. While some regions around the world tend to favor one system a little more than the other, globally they are close to dividing the market 50-50, said Mark. “In any market, they both have meaningful market share. You have like a Coke – Pepsi thing.”

But producing boards with both fins systems is a challenge for any company. “From a manufacturer’s standpoint, we have to manage two sets of fin plugs, which doubles our SKUs across our entire product range because a store might order a board with FCS and another store may order the same board with Futures,” explained Mark. “It’s a nightmare from a production efficiency standpoint.”

“The only reason the situation exists because these two companies have generated such dominant market share that nobody wanted to pick one over the other,” he said. “That’s been the status quo for 20 years and no one wanted to take the risk. Neither did we.”

“But in a perfect world, if you were to design the surf industry from scratch, you would standardize the fin plugs,” he said, referencing the skateboard and snowboard industries where standard hole patterns have been widely adopted for many years now.

Over the last several years, Mark said the Carlsbad, California-based Firewire staff slowly began thinking it was time to change things up.

In an effort to solve the fin box dilemma, the company spent a lot of time looking at numerous options. One solution was to create a universal box that would fit both FCS and Futures. But after three years of studying possible ways to manufacture a system compatible with each, they didn’t find an acceptable solution.

Next, they thought about the consumer and what surfers actually wanted. The inventory shortages and supply issues the company had through the pandemic revealed some consumer insights to the Firewire staff. While customers were looking for boards with one particular fin system, if it wasn’t in stock, it was easy to shift that consumer to purchasing the other.

“We started doing customer surveys and we found that there’s definitely people at the margins who are committed to one system over the other, but the vast majority of surfers are wedded to the board model and their shaper of choice,” Mark stated. “Fins were way down the list of considerations.”

“So, we thought: Let’s just pick a fin box system and only run with one,” he said. “When you look at the streamlining of our entire supply chain, our go-to-market, our inventory management, everything that comes around managing two different fin plugs systems, we decided to go through with it.”

Mark explained the company, which runs two surfboard factories in Thailand that manufacture numerous lines of boards, still had to decide which system they were going to go with, and it wasn’t an easy choice.

After considering several different factors between Futures and FCS, Firewire believed it came to an educated decision.

One of the obvious benefits of consolidating to one supplier would be additional volume discounts, Mark noted. But he explained both companies were offering similar pricing, so that wasn’t a main factor.

The next consideration for Mark and the Firewire team was availability and supply chain concerns.

FCS builds its boxes overseas, while Futures builds its boxes in Huntington Beach. This was one key differentiation point. “Given the state of play around disruptions in global supply chains, which we’re very familiar with because we build products offshore, we felt that on balance it was a safer bet to go with Futures because it was built down the street.”

The second point of difference was in the design of FCS and Futures fin boxes. “With Futures, the cant is in the base of the fins,” he explained. “But FCS has the cant built into the fin box, with multiple cant options offered through various boxes. So, the inventory management around the FCS fin boxes is a much bigger hassle. You have a lot less SKUs with the Futures box system. From a supply chain and inventory management perspective, it was a no brainer.”

Finally, Firewire shapers and team riders also had a say in the decision. “It came down to getting Kelly (Slater), Rob (Machado), Tomo, and Dan Mann on board,” he said. “As it turned out, Tomo, Dan and Rob were Futures guys. So, once we had buy-in from everyone, and the other reasons mentioned, we chose Futures.”

Still, Mark admits the decision is a big gamble. “We’ve done our homework. We feel that it’s a calculated, educated risk that we’re willing to take.”

FCS sent SES a lengthy statement about Firewire’s decision, and here it is in full.

“Firewire has announced that they will no longer be offering the FCSII system to their customers. As Firewire get more serious about selling fins (Endorfins), they are looking to maximize all sales related to their boards.”

“We were approached by Firewire to license FCSII technology because we still have an active patent. We chose not to go down that road because that decision would have a major impact on domestic board builders and retailers globally.”

“It is disappointing that Firewire has chosen to remove ‘choice’ for their customers. This commercial decision will result in denying Firewire’s customers access to the FCSII system along with our exclusive range of high performance fins from world champion athletes to the best shapers globally, and revolutionary Swiss engineered H4 fins which we believe are the best fins in the world.”

“FCS high performance fins are the evolutionary result of long term partnerships with the best surfers and shapers in the world. Fin technology is as crucial as the surfboard itself and cannot be easily replicated. Even the decision not to use the FCS fin plug is a backwards step with Firewire customers now having the hassle of carrying tools every time they go for a surf.”

“It’s hard to believe that a premium board maker like Firewire doesn’t value the importance of premium fin technology and customer choice.”

“Looking forward, FCS has some exciting fin tech coming, which sadly Firewire customers will not have access to.”

The news of Firewire’s change to Futures is already spreading via the surfing industry coconut wire. Mark wanted to address one particular allegation directly: “We’ve heard some chatter that we choose Futures because FCS would not license the FCS11 click-in base for the Endorfins fin range, but that doesn’t make any sense to us. As mentioned, we feel that FCS and Futures have roughly 50/50 market share globally, so whichever system we choose was going to have implications for our business and potentially the industry.”

“Bottom line, we factored in the streamlined inventory of plugs and boards that going 100% Futures allows us to stock, and we believe that the Futures system’s support along the full base of the fin creates more drive. Furthermore, it’s our contention that the single screw needed to hold that fin in place is not a deal breaker for our customers.”

Phase In / Phase Out

Firewire still has a significant inventory of FCS boxes and will phase that out over the half year as they use up the supply.

“Because our supply chain has a pretty long lead time, we carry quite a bit of inventory,” Mark added. “We have enough FCS fin plugs for the next six, seven months to keep running on a roughly 50-50 split with Futures, which is what we’ve been running historically. I would say in April or May of next year, everything being delivered to retail will shift to Futures.”

Mark noted if a team rider has a deal with FCS, they’ll still build boards for them with FCS boxes.

While Firewire has gone all-in with Futures, the company still acknowledges the market share that FCS has. Firewire launched Kelly Slater’s fin company Endorfins in November of last year, and as part of the investment, Firewire became the majority shareholder in the Scarfini surfboard fin factory in Durban, South Africa to produce these fins. Mark said the brand offers both Futures and FCS compatible fins.

“We’re a surfboard brand that is building what could become one of the major fin companies in the world, because we have Kelly at the helm and with Rob soon to be added,” he said. “We co-own the factory. Obviously, you want to sell fins to everyone who surfs, not just the Firewire customers.”

We also reached out to Futures to get their reaction to Firewire’s decision.

“We are very excited that Firewire has chosen Futures Fins as the exclusive fin mounting system in their boards,” Futures President Alex Marinescu said. “Mark Price is a seasoned executive, surrounded by a team of world class professionals, and we’re sure that this change was not made lightly and is in the best interest of Firewire.” 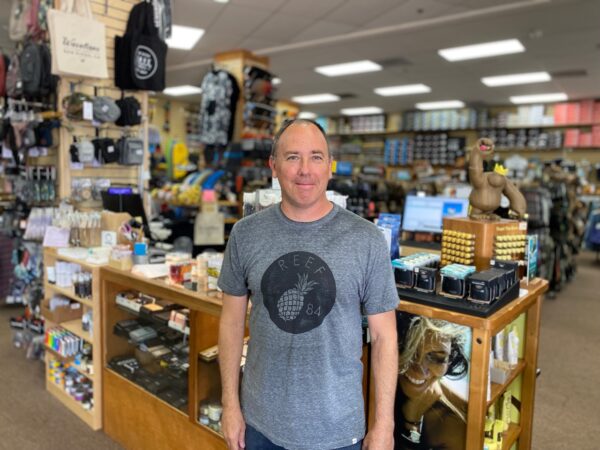 Our Favorite Interview of the Year 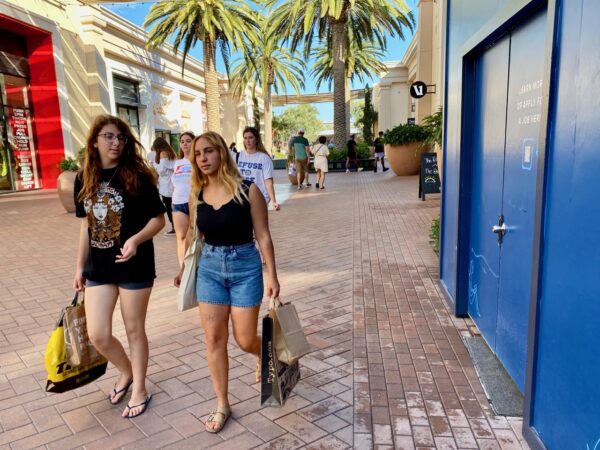 Shoppers at the Irvine Spectrum Center this month - Photo by SES 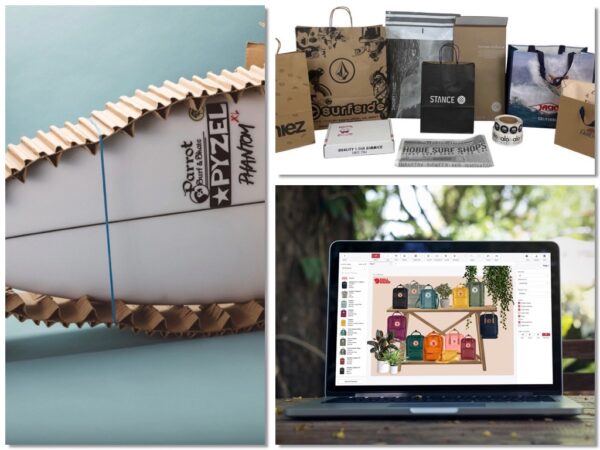