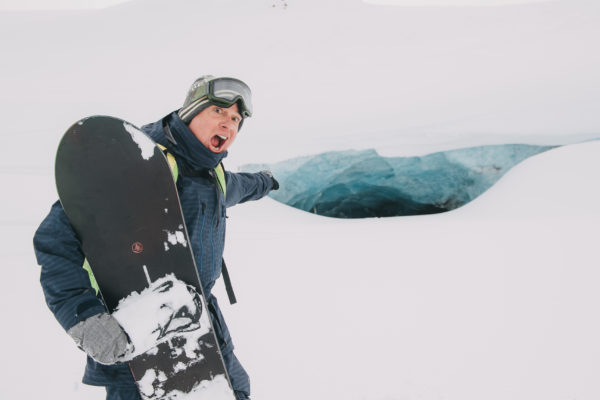 Tributes to Burton Founder Jake Burton flooded social media after the father of snowboarding passed away late Wednesday night at the age of 65.

His impact on snowboarding and the action sports industry overall is immeasurable, and SES decided to check in with the experts to talk about Jake’s legacy.

We reached out to the founders, owners and leaders of snowboard brands to get their take on what Jake meant to them, the sport and the industry.

Nearly all of the people below are involved with brands that still compete with Burton to this day – in boards, outerwear, boots, goggles and more. And they all realize how his pioneering work to launch snowboarding changed their lives.

“Losing Jake is the biggest loss in our industry that I can recall. To all of us, Jake has always been an icon and legend. From his early days as an amazing rider, I had a chance to see him ride in Europe and then watch as he pioneered our snowboard industry, always staying authentic to snowboarding and to our culture. Jake is someone who will live on forever. We send our deepest condolences to Jake’s family and friends. Know that you are all in our hearts and we are thinking of all of you. Thank you Jake for coming to this planet and for making an amazing contribution to all of our lives. We are forever grateful and you will continue to inspire us to be true, authentic and pure.”

“I’m so sad to hear that Jake has passed away.  He was a friend, a mentor and an inspiration to all of us in the snowboard industry. My thoughts and prayers go out to his family, his friends and his employees. Jake will live on in all of our hearts and we will miss him. Thank you Jake for your friendship, your support and your commitment to snowboarding. You are now in Heaven and I’m sure the pow is pretty good up there! Love you…Wooly” 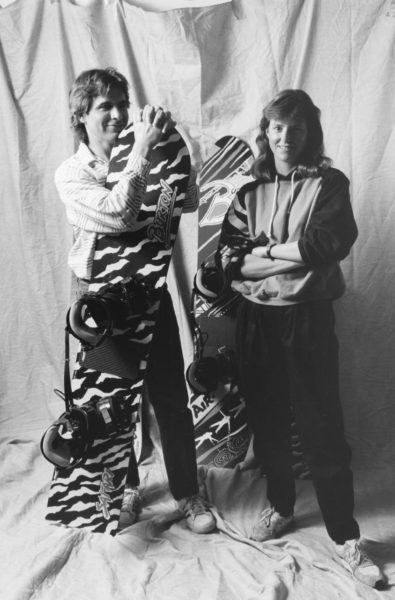 Jake and Donna in the early years – Photo courtesy of Burton

“I came into this industry from skateboarding where we didn’t give a sh*t what anyone thought. We did our own thing. Snowboarding in the mid ’90’s had this same attitude and there was simply no one more important than Jake who carried this torch. I’ve always had a tremendous respect and admiration for Jake, Donna and Lacy despite being on different sides of doing business. There is only one Jake and the entire industry owes so much to what he and Donna have done, and will continue to do, for all of us. Much Respect.”

“When I heard of his passing, I thought of what Jake meant to my life. I had never thought about it that way before, and I got very emotional. My first few snowboards were Burtons, which was incredibly impactful to me. Getting on a snowboard changed my life. When my home resort opened up to snowboarding, that was even more life changing, and Jake was behind both of those things.

“And when I say he had a big impact on my life, that has nothing to do with being a pro. That has to do with being a kid who had his life course altered because of his efforts. Then I think about how many people around the world who can say the same thing, and it’s a lot of people. That’s a life well lived.

“I only got to know Jake personally over the last few years through Donna, who I work with on Protect our Winters. When I met Jake, we instantly hit it off. I couldn’t believe how much fun he was to hang out with – his passion, his stoke. It was like that every time I saw him – a big hug, very energetic conversations.

“The Jones Snowboards staff will celebrate his life tomorrow (Friday) by going snowboarding. Our thoughts and prayers go out to his family.”

“On behalf of everyone in the CAPiTA family, we say thank you, Jake. Thank you for your vision, your pioneering spirit and your dedication for the benefit of all. Thank you for the realization that this silly little snow sliding device you called snowboarding would reposition priorities and change people’s lives. No matter what snowboard we ride, there are a lot of powder slashes ahead and a piece of you in every single one. Thank you.” 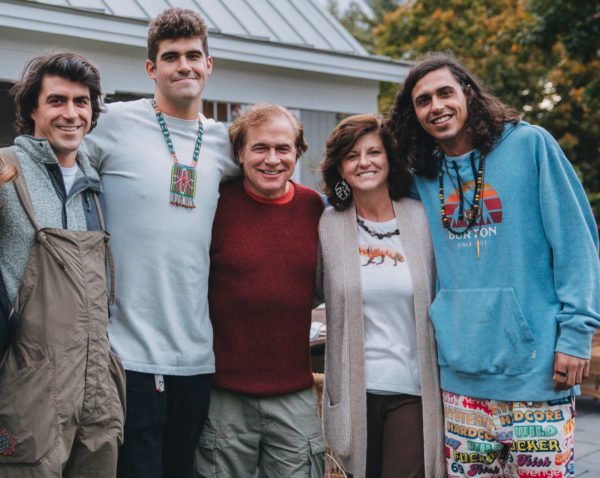 Jake and Donna and their three sons (left to right) – George, Taylor, and Timi – Photo courtesy of Burton

“We’ve lost a legend but we’ve also lost a founding father. What he and Donna and the Burton crew created was something out of nothing and it changed people’s lives – how people lived, what they pursued and what ‘community’ means to all of us in action sports. I’m incredibly grateful for what Jake did and just hope his family can see the tremendous impact he had on all of us. Every single person in action sports has been impacted by what he did.”

K2 Sports President John Colonna, who worked at Burton during his career

“Jake was THE F****** MAN – an inspiration, a mentor and a friend. He created a culture and community that my life, like others, is built on. The entire industry, including skiing, is a better place because of his vision. Thank you Jake. Thank you for the turns, the opportunity, the good times and most importantly, the friends I have made.”

“I will never forget my first SIA trade show. I had my little 10×10 booth made out of haunted house walls I bought for $200. It was the most ghetto booth on the floor, and we were right next to this multi-million dollar Burton booth. I was like ‘WHAT AM I DOING HERE?’ Then Jake came over to the booth and we spoke for about 20 minutes. I was in awe that I was speaking to him and his love and words of support he shared with me that day made me feel incredible and inspired with confidence, something that I will never forget. What a legend and inspiration. I’m forever grateful for what he has done for this industry and the sport of snowboarding. Much love to him and his family – REST IN PEACE BROTHA.”

“I was deeply saddened by the news of Jake’s passing.

“He was a giant in our world.  I remember my mind spinning after seeing his first advertisement in Skateboarder Magazine, just a short 40-some years ago. He had just opened up a whole new horizon of what-ifs to all of us who lived in cold climates with dreams of surfing. 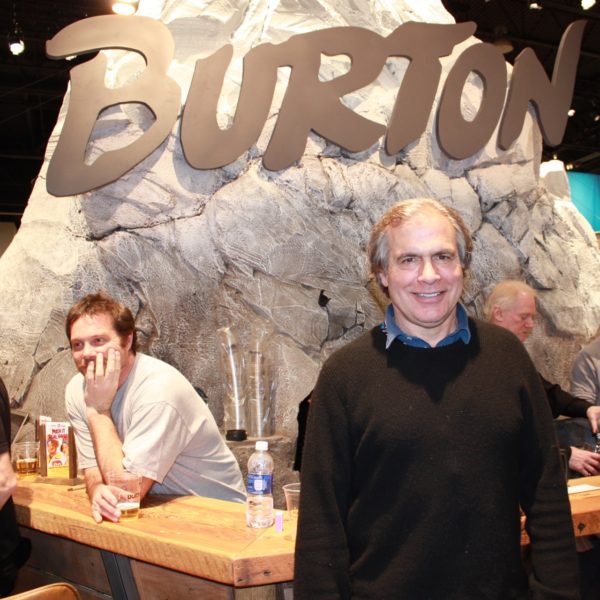 “I first crossed paths with Jake at the 1983 World Snowboard Championships at Soda Springs, CA.  His East Coast team arrived with matching skin-tight red racing speed suits, while we tried our best to look like West Coast dirt-bag hippies.  He gave us a perfect yin to be a yang to.

“We learned from day one that Jake was on a mission to make snowboarding draw some mainstream respect.  All of us that dove head first into the snowboard industry also learned quickly that Jake was highly competitive and didn’t mind winning.  Jake Burton was the role model for the New England Patriots, always relentless, and always with a great product.

“But he never lost sight that ultimately it was all about having fun and getting out onto the hill – like 100 days a year.

“My most fond personal moment of fun with Jake was at SIA in Denver several years ago.  I delivered to Jake a fresh three-pack of sulfur stink bombs, and engaged in some quality conversation regarding the hidden secrets to using them in a stealthy fashion.  Judging by his sly grin, he had some ideas brewing for fragrant improprieties.

“From the bottom of my heart, I hope Jake is on a great new journey somewhere beyond our wildest dreams. 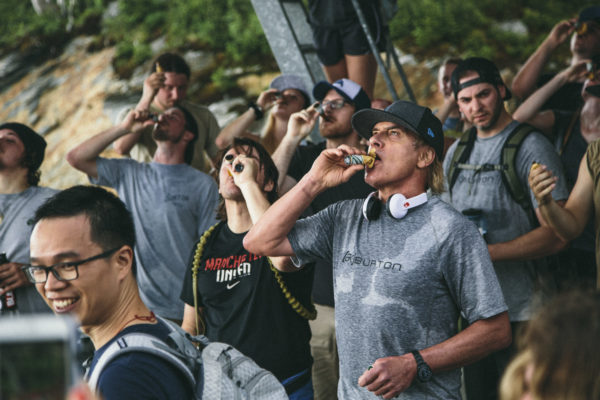 Jake at a company meeting in 2017 – Photo courtesy of Burton

“We were shocked and saddened to hear of Jake’s passing. Mervin is in the opposite corner of the country and focused on our own board building endeavors and we were not fully aware of the severity of his diagnosis.  Jake and Burton as a company always represented the establishment from our young, penniless, punk, board building perspective. We inevitably used Burton as something to rebel against but the big B was and is always on our minds and influenced where we go and don’t go as a brand.

“It was impossible to ignore the absolute domination Burton held in every category for so many years. His efforts pioneering ski resort relations and opening doors for snowboarding helped us all. Being so far apart physically and a little competitive we were never super close but could always feel his presence in our world.  We always appreciated that our friend Craig Kelly found a nice home at Burton. To this day I wonder what the snowboard landscape would look like if Craig hadn’t had his accident. I have a feeling he and Jake would have done some amazing things over the last 10 years.

“It’s hard to wrap your head around all that Jake has done in a lifetime of contributions to the snow shred game.  For many years Jake would avoid engaging with Mike and I at events, maybe because we were slightly wacky or looked like we were out of our minds. But in the peak of the Skate Banana/Magne-Traction pulse, Jake came up to us at an event and congratulated us on that project. It sounds trivial but it meant a lot to us – kind of like a strong silent father figure or coach saying ‘Nice job kid.’

“Our hearts go out to his friends and family and the snowboard community. We will miss him. Jake, thanks for sharing your energy with us all.”

“Jake changed the world – and my life. I met him with my father when I was 11 at a trade show, and his influence has stayed with me since. Not just in what he produced, but how he did it – by following and sharing his passion with everyone, from his close family to fans on the other side of the world, all while staying independent and true to our culture. I’m so grateful that my brothers and I had the chance to spend some time with him a few months ago. Our thoughts are with Donna and their children.” Donna Carpenter on What’s Next for Burton